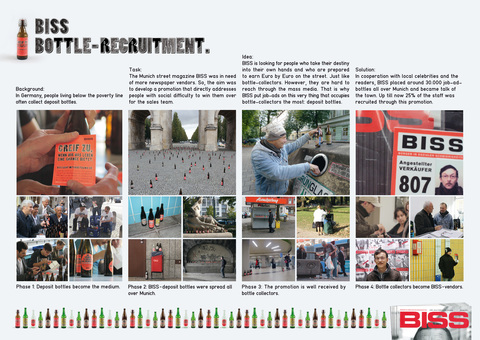 
Brief: The Munich street magazine BISS was in need of more newspaper vendors. So, the aim was to develop a promotion that directly addresses people with social difficulties to win them over as new members of the sales team.

Solution: To qualify as one of their vendors, BISS is looking for people who take their destiny into their own hands. Who are prepared to earn Euro by Euro on the street. Just like bottle collectors. However, these people are hard to reach through the mass media. That is why BISS decided to turn the very thing into a medium that occupies bottle collectors the most: deposit bottles.

Scale and Location: In cooperation with breweries, local celebrities and the readers, BISS placed around 30.000 bottles all over Munich. Thus, the street magazine was not only able to get in touch with the bottle collectors but also became the talk of the town.

Results: The idea made an impact: Up till now 25% of the staff was recruited through this promotion.