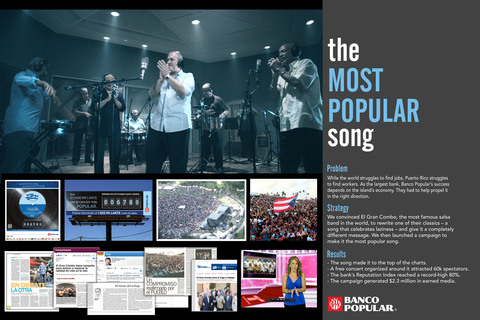 
While the world struggles to find jobs, Puerto Rico struggles to find people who want to work. As the largest bank in Puerto Rico, Banco Popular’s success depends on the island’s economy. They had to help propel it in the right direction. So we convinced El Gran Combo, the most famous salsa band in the world, to rewrite the lyrics to one of their classics – a song that celebrates laziness – giving it a completely different message.

We then launched a campaign to make it the most popular song. It quickly rose to the top of the charts. Radio stations included it in their standard rotations, meaning 3 minutes of free publicity for the bank each time the song played. Its success led to a free concert featuring El Gran Combo that attracted 60,000 spectators. It also sparked a debate that inspired a movement of individuals, organizations, and corporations committed to the island. The song became part of Puerto Rican culture, becoming associated with the brand without even mentioning its name, and generated over $2.3 million in earned media. In times when banks are particularly disliked, the bank’s overall Image and Reputation Index reached a record-high 80%.