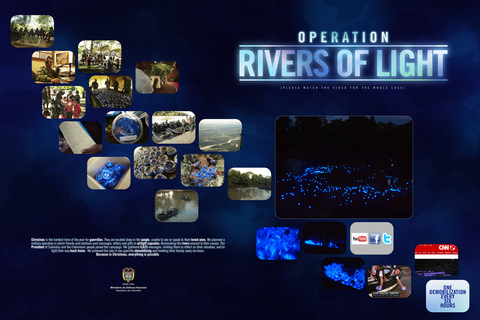 
We planned and executed a military operation. We made an official announcement trough traditional media (such as TV, radio, press), inviting Guerrilla's relatives and friends, people from war-affected towns, and people from all over the country, to send messages, letters and gifts, inviting Guerrillas to leave the weapons, and come back home this Christmas. We put all this stuff in lighting airtight capsules, illuminating the rivers nearest to their camps, and their way to the freedom.

We based our strategy in two facts. We found out Christmas is the most emotional and hard time for Guerrillas, because it's when they feel further from their families and their loved ones. As Guerrillas don't use any of the traditional media because of their war condition, the rivers from all over the country have become their most important channels of communication and transportation. Every FARC base camp is built close to any river of the country. The rivers go to the most intimate point of the illegal armed forces, more than any other media.