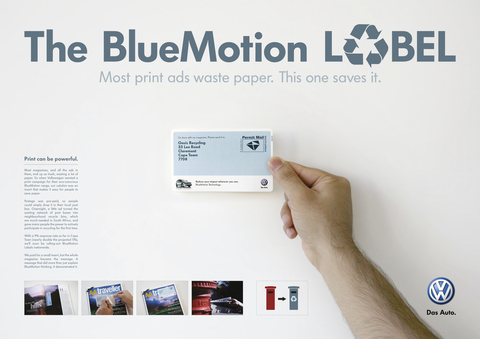 Insight: Magazines clutter homes, then eventually end up in landfills, meaning that all the print ads inside them contribute to paper wastage.

We asked a simple question: can a print ad help save paper, not waste it?

Idea: We created not an ordinary print ad, but a small insert that could be used to recycle magazines. No longer needing photography, we used the production budget to buy prepaid postage. So all that people would have to do is peel off the backing, stick it on the front cover, and drop it into their nearest post box – which are commonplace in South Africa, whereas formal recycle bins are not. Using the existing infrastructure, the idea turned ordinary post boxes into a network of recycle bins.

Results: We paid for an insert, but the whole magazine became part of the BlueMotion message. With early reports suggesting a roughly 9% response rate so far (nearly double the 5% projected), we’re planning to extend BlueMotion Labels to other regions of the country.

The smallest Volkswagen ad we’ve ever made may have the potential to make the biggest difference.