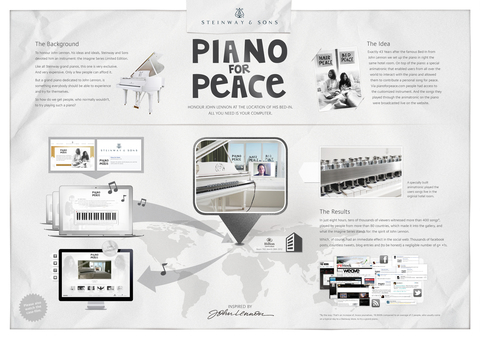 
Honouring John Lennon, Steinway and Sons devoted to him the Imagine Series Limited Edition. Like all Steinway grand pianos they are only attainable by the few who can afford it. But Steinway believes, this instrument should be experienced by everybody.

Therefore, other than usual, we addressed a disperse audience: Critical, politically interested and pop-culture savvy people.

To give them a reason to experience the Imagine piano and to ultimately play it, we used the anniversary of Lennon’s famous Bed-In at Hilton, Amsterdam. And we created an experience commemorating that event. The same hotel. The same room. Just 43 years later, there was the piano – equipped with a newly invented animatronic. It allowed users to play the piano in the room, from wherever they were! “Simply enter pianoforpeace.com, contribute your song with your computer keyboard and it’ll be played by the animatronic on the live webcast.” A message, was spread on all relevant channels leading to tens of thousands of viewers witnessing 400+ selected songs, played by people from 80+ countries.

Thus, we strengthened the public’s perception of Steinway & Sons. And changed it a little bit: Now they not only stand for excellent instrument but also John Lennon’s ideas and ideals.