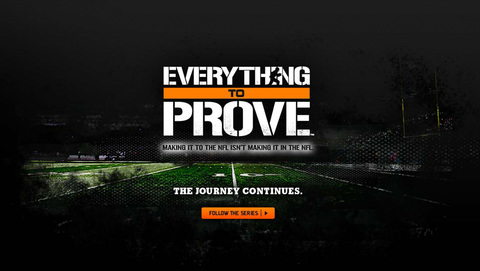 Gatorade
"Everything to Prove"


Introduction of G Series designed to fuel an athlete before, during and after a workout or game, Gatorade went beyond sports hydration and into the world of sports nutrition. Our target, teen athletes, didn't view sports nutrition as important to their performance.

Convince teen athletes that everything they put in their bodies is fuel that can help them get to the next level.

We recruited 15 of the top NFL Rookie prospects to incorporate proven fueling habits into their training programs to see how it would help them overcome one of the toughest challenges in sports today: The road from NFL prospect to NFL pro.

As the Rookies saw results in their performance, they became sports nutrition advocates themselves and began tweeting and facebooking directly with their fans.

93.5% of teens found the content to be appealing and 80.5% found it to be relevant to their training and nutrition habits.

Everything to Prove became the most watched and talked about content program in the history of the Gatorade brand.