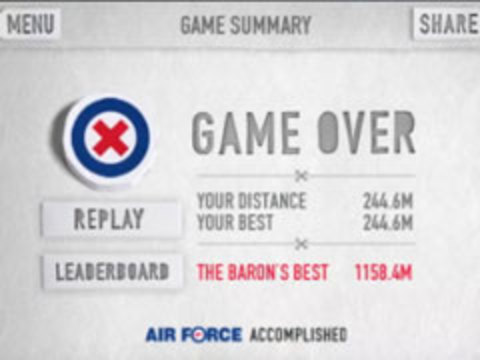 
The Australian Air Force created ‘The Paper Baron’ - a simple, addictive, iPhone game made out of paper rather than pixels.

Ultimately, it was this paper aesthetic that dictated how the game would be played. A cloud, for instance, was a ball of paper that couldn’t be flown through. And if your plane caught fire, well that was cause for celebration.

The paper landscape was tailored with iconic buildings to match the city in which you were playing, and the experience was further personalised by allowing users to create local competitions called ‘Airstrips’. Only players standing in that area could compete against one another. Distances were marked out on google maps to show how far in reality your plane was thrown. The person with the longest distance became the Baron of that airstrip - a title as crazily sought after as becoming the mayor of your local café on Four Square.