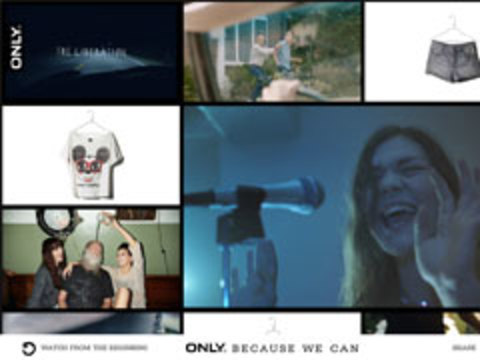 ONLY Jeans
"The Liberation"


ONLY is a Danish fashion brand present on over 26 markets across the globe that targets girls between 15 and 25, North Kingdom was approached by their lead agency, Uncle Grey, and asked if they could help manifest Onlys’ new brand approach and message “Only Because We Can” and showcase the spring and summer collection 2012 through a highly entertaining and interactive film experience. The brief focused mainly on how to tell the story about three girls living their lives to the fullest, crossing boundaries and serving as inspiration for the target audience and communicating the attitude of the brand. In a way it’s a classic Cinderella-like story told in modern and playful way. The interactive aspect is really important, where the users can play around with the film and at any point find out more about the clothes worn by the models, in a very non-intrusive way and at the same time also be part and interact with key situations through out the film. The outcome is an interactive film called the “The Liberation”